Zazzle Decides We Are Offending Ourselves--Guest Post by Melanie Yergeau

I made some button templates on zazzle because I do not have access to a button machine. (When I lived in Ohio, I was able to make buttons at the student union.) One of the buttons said "neuro queer" with a little rainbow mobius strip superimposed in the middle of the button. I also made a couple "autistic pride" buttons. I ordered a few (to give to some of you as I see you at conferences), but just now received an email from zazzle saying they cancelled my entire order and deleted the buttons because they found them offensive and discriminatory. 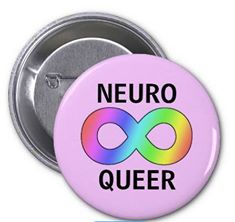 Above is a photo of the offending button. Zazzle.com cancelled the order for the following reason: "Design contains content that can reasonably be viewed as discriminatory based upon race, ethnicity, national origin, sexual orientation, or disability."