A short interlude in between parts one and two, a clarification of sorts.

Aces, or people on the asexual spectrum, count as queer. In other words, asexuality is a legitimate form of sexuality. Being Ace is as legitimate a way to be Queer as being Gay is. 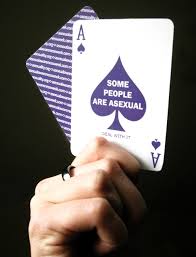 [Pic is a hand holding a couple of playing cards done in purple ink. You can see the ace of spades. On the large spade in the middle is written "Some people are asexual." Under that it says it tiny print: "Deal with it."]


The only time a person who is asexual in any way does not count as Queer is if that individual person does not choose to identify themself with the term “Queer”. That is the only way. No other person besides the person themself can kick the person out of being Queer or in any other way erase them from having a sexuality or having their sexuality be considered among the ranges of human sexualities. Nobody but the person can do this, or any related thing.

I am using a singular ‘them,’ a singular ‘themself.’  Spell check doesn’t like it, but I do.  This is one of the ways the people who reject gender binaries are doing this rejection within language, fluidly.  There are other ways, also.  It is good to ask people how they like to be referred to in terms of pronouns. 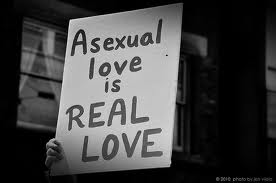 [Black and white photo here of a hand-lettered sign being held up. Sign reads: "Asexual love is real love."]


Aces, it seems to me pretty clear you’re as Queer as I am, Queer as a three dollar bill, and as long as you like the title, party on. If you don’t, no pressure, you’re Ace and that’s ace and goodspeed. :)  But now I'm curious: for those on the ace-spectrum out there who may read this: does Queer seem like a good fit for a way you'd like to overarchingly identify, say as Autistic is to Disabled? I know it does for some I know, which is why I wrote this. I wrote it for them. But I am interested in hearing from people I don't know.

Ace-haters, no hate allowed here.  So PM me.  You can get to my FB through my profile.

Thank you for listening.