This is an essay that has to do with the social media crisis described here in this post on Yes, That Too.

By the time you get to this, you may already have read the above post, but to make a long story short, The Feminist Wire put forth a Call for Papers which on the face of it appeared to invite people with disabilities to the table to talk about disability issues with them in a forum.  Unfortunately, the call was written in such a way that many of us neurodivergent types had a great deal of trouble trying to work out what it actually said, or was asking for, or how, or anything much else about it.  Alyssa, who is the writer of Yes, That Too, and many others, asked them to rewrite it so we could access the information contained in the call.  (I also asked them something else very important and left unaddressed, but I think I'll put that problem as something to work on into the forum itself, if I can access it.)

They do seem to have tried to rewrite it, but not to much avail. It's almost the same as it was before.  But. The trouble really began when Alyssa received this:

We appreciate your feedback and comments.  We've discussed the concerns, and rather than rewriting the CFP again, or creating multiple versions, we invite you (and others) to share your own interpretation of the CFP with your communities.  This seems to us the most reasonable and helpful way to proceed.

Dear The Feminist Wire, I was on your side in a sort of way, just a little tiny bit, before I heard this, and I'll tell you why and how in a minute, because what I think about that part still holds true.  But I really do have to address what is wrong with this picture. 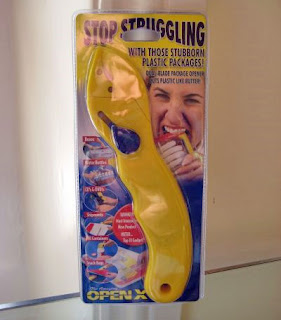 [Visual image: photograph of the ingenious "Open X" device in its triumph-of-irony impossible-to-open packaging, which depicts a woman trying to open such a thing with her teeth as the words STOP STRUGGLING fly over her head.]


Open the gate! I cannot get in!

Well, why don't you just come on in and tell me all about it.  Then we'll see about opening that gate for you.

You probably do, now, because I told you the story in a way that was likely cognitively accessible to you. But I really believe it is possible that you were unable to access the request properly before because you did not know what it meant, and perhaps do not know how to write plainly because it had been beaten out of you by the system.  I'll get back to that in a minute, because it relates to this: I'm also willing to believe that it could not possibly have occurred to you to say something like, "We have no idea how to do what you are saying, or even really what you are talking about," because the dominant culture of academia has bashed that out of you too; if academics were to go around saying things like this to who all ever, the structure would crumble.  It's not like there's jobs lying around, seriously.

Although I know there's a chance I am hurting your feelings with this, I promise that is not what I am trying to do.  I am trying to explain a problem that I don't think is well enough understood because it is difficult to locate where there could be a place to put yourself in a position to see it clearly.  If you have spent enough time in academia to be bashed into knowing (even if you have not taken the sociolinguistic turn such that you have self-reflective meta-knowledge about it) that you must use particular kinds of jargon to mark yourself as an insider with a place at the table, then there you are.  You are at that table and I guess you're stuck, from the sound of it.  Your voice has changed, and if you think about it out loud, it will hurt, which is well expressed by this guy here to whom I'm linking.  (Newtown may have forgotten him, but my town is delighted to have him!)

I'm going to get to the glorious solution of the I-Don't-Know in a minute.  I don't like to write about problems without at least having thought about some of the fixes.  I have been told I don't always have to fix things, and sometimes people just want to be heard, hehe, but since I'm the one talking now, I can feel free to do my characteristic fixating on fixes.

But first, one more important theoretical thing about why I'm kind of on your side, and also why you probably don't know what it means even to write in accessible language, let alone being able actually to accomplish it.

The ideals of academic jargon to which you have been enculturated were designed for gatekeeping against unspecified non-elites: you were trained to lock out those who didn't fit into the "meritocracy" of an aristocratic, leisured yar yar yar-- you actually know all this now that you are thinking about it so I'll move on.  It's a classist, elitist thing writ large, very large, without fine detail, and you yourselves individually probably do not believe you fit in to the elite so you worked your ass off to talk like that and sweat every single day how much you can keep up depending on where you are in the hierarchy.  The fact that this wall of language turns out also to be inaccessible to many neurodivergent types of disabled people is just a side effect, and I mean I don't even think it even rises to the level of being an afterthought.  So we came at you out of left field.  You don't even know what we're talking about.

But that would have been a really excellent response.

And you could have said, do you know anyone at all who can both gain access to what we have written and write in whatever you mean by accessible language? Because we do not know how to do it.  The reason we are not doing it is because we do not know how, or even really what you are talking about.  And you would have sounded very respectful, and what you said would not have been absurd and insulting.  And the response would have been wildly different.

Academia beats the possibility of this response out of us, just as it beats out of us our mother tongues.

But we can Occupy Academia; we can stand against oppression and when we find it in ourselves respond with the truth even if it is very risky.

I am saying "we" to you now.  Do you feel me?  You can still say other things that are not the things you said before, because lived life moves fluidly.  We are not only one of our enculturations.  We can choose.  We can choose to choose together if the gates are flung wide open.