The paradox of white cis patriarchial binarist normativity:
Years ago I asked myself what a man is and what a woman is.

And I still don't know. Never will know.


People think they know, but do they really? Nah.

“I want to understand why the PD needed to shoot the distraught woman holding the bat. Was there no other way?” My friend posted this on Facebook last week. That’s how I found out.
This FB friend and I live in the same a.  I looked online, found the news reports. A 53 year old white woman, “reportedly despondent”
Who made that report? Who came up with the word despondent?

called 911, afraid she would harm herself or others. “Several” cops came, and called to her. She swung open the door and “emerged”
what did ‘emerged’ feel like? The final emergence in her emergency.
with an aluminum bat in her hands. Two cops shot her. And she is dead.
Some reports said she swung at them. But the first report said she opened the door.     A bat.         In her hands.
The sheriff’s department issued a statement
the officers “were left with no choice.”
no choice to back the fuck out of the way?
no choice to grab the bat from her?
no choice to use their batons to knock it out of her hands?

“She made a motion
what was the motion
of a woman
so crazy
she actually thought that the cops would help her
toward the officers, and they didn't have any other options than to use their firearms.”
and shoot
to kill

Two days later I learned she went to the mental health center where I used to go.

Was she in DBT? Was she in Anxiety and Depression Support Group? Most of the people who go there are not white, not that old. The newspaper said she was 5’5.
I think she was in my women’s group.
The poetry group, the LGBT group - there were so few people - no one that race, that age.
But the women’s group…..

I don’t think she was in my WRAP group.
Wellness Recovery Action Plan. With sections on Daily Maintenance, Triggers, Early Signs, When Things Are Breaking Down, and finally: The Crisis Plan.
I just went to get mine. Still there, on the bottom shelf of the coffee table,
dusty
and not necessarily
findable by someone
who might
have need,
but I took that 10 week course and I made that notebook so I will
never
ever
be 5150ed again.

I called my ex-therapist, from when I went there, and asked if she could tell me, who is this woman? Will there would be a memorial for her? How are folks at the Center handing it? Call never returned.

There have been no demonstrations, no calls to action, for the name-withheld woman. No picket signs cry “Killer Cops. No Justice, No Peace.”
My sister, where is your peace? Was there ever a time when justice found you?

No one demands an independent investigation. No calls for review of the current cop training for when they deal with The Mentally Ill
what?     what is that?   do you know it when you see it?   Or are you “It”?

I read all I can online. Still can’t find her name. One article has the exact address.
She lived alone in a first floor apartment.

I go there. It’s a nice building.  A sweet sitting area, with benches and flowers and bushes by the parking lot. At the door: heavy duty security. Leafy trees shade the building. Across the street a grassy field.
Later I Yelp it, all the reviewers gave it 1 star, talked about how thin the walls are
“you can hear everything.”

Finally buzzed in, I knock on the manager’s door.
It’s getting
harder t
o breathe.

I left my oxygen tank in the car to look more credible, less like the HUD client I am. “The woman who was shot last week,” I say to the two in the office
I do not say murdered
“I think I may know her. We went to the same organization.”
I do not use the words “Mental Health.”

“What is her name?” one asks, before I ask her.
If I’d only been able to guess it. But I don’t have a name attached to this woman I maybe knew
“How are people here doing?” I ask. “It must be hard.”
“Oh everyone’s fine. They’re getting extra services.”
What does she mean, extra? Why doesn’t she say “we’’?

They take my name and number. “Do you want to be told if there’s a service for her?”
“Yes.”
I ache for some extra service for her
“We’ll pass your information on to the detective.”

Oh. Hadn’t seen that one coming. I’d imagined calling the cops: I’m the Poet Investigator delving into the case of the white woman, aged 53, who died - was killed - was murdered - by your department last week. Have you divulged her identity yet?

I think they’re waiting to contact her family
and it’s been so long now, a week and a half,
maybe that’s hard to do.
The person who told me this woman and I went to the same mental health place
the “Organization”
probably knows
why it’s taking so long
maybe knows her name
but thinks it’s unethical to say even a word.

But a word, a name was said. Our shared Organization.
So I know that she walked the same halls I did,
whether she went to the Voice-Hearing Network
or the Self-Care Group.
We sat around the same tables,
stepped into the courtyard,
maybe saw the same shrinks.

Just after I read that first post on Facebook
someone else commented,
the woman “was small, didn’t weigh much.
“She was one of my faves.”

At the place where she lived
there’s a warning sign:
toxic chemicals including cancer-causing, are used in this building. More information is available to tenants.

But she didn’t die of that.
She died of lead poisoning.
Acute.

The blasts of the bullets
in that place where we hear everything
still ricochet through the vestibules
of those who do and do not know
the name of the South Bay woman
who mid-April, 2014,            fatally
fatally called 911. 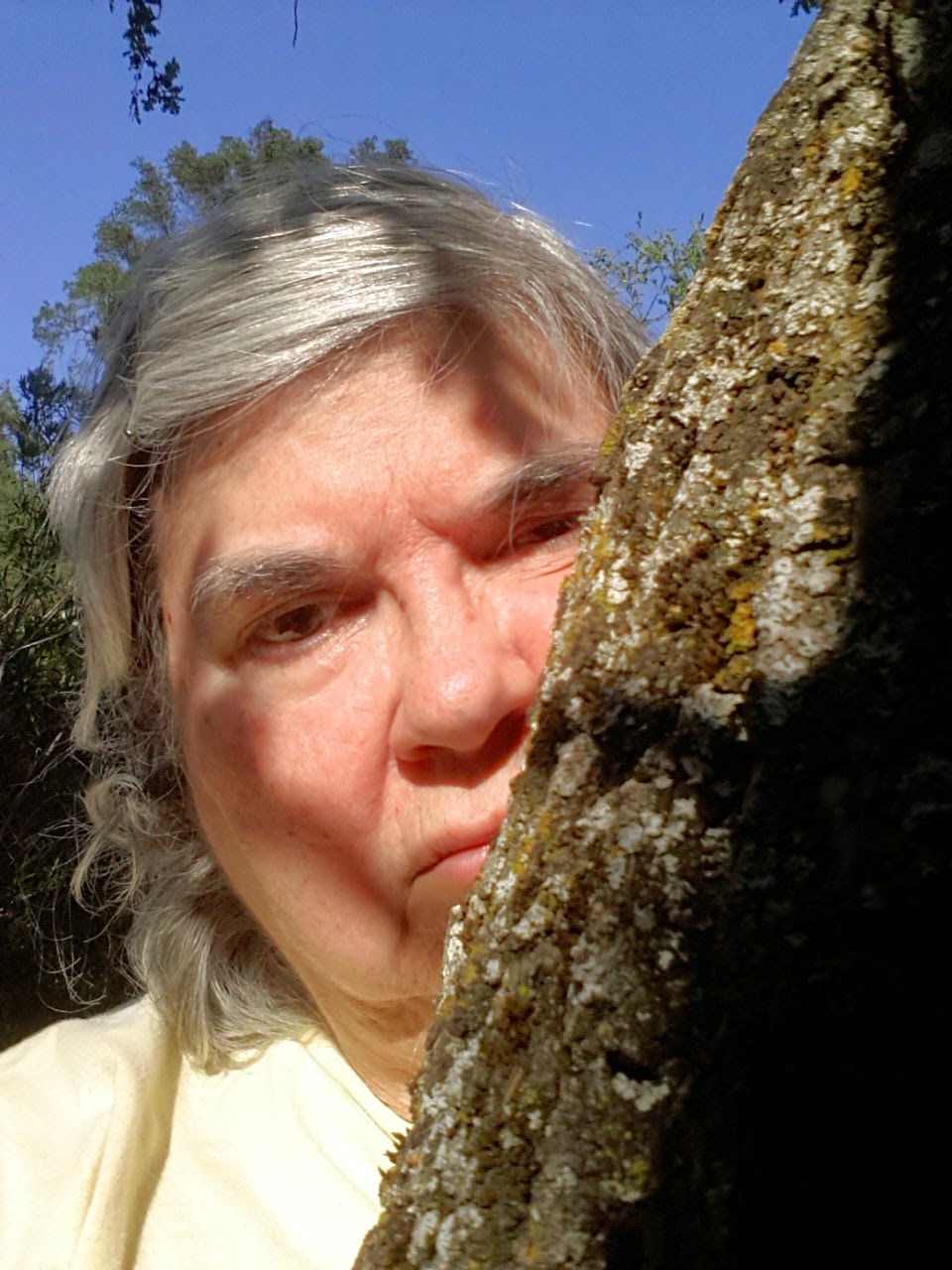 bio: After 67 years Barbara Ruth still believes another world is possible. More than ever, she believes in the healing power of nature.]


(Ed note: Here, also provided by the author, is the above story as told by San Jose Mercury News.)
Posted by Elizabeth J. (Ibby) Grace at 8:40 AM 2 comments: