The time has come, the walrus said, for the concept of NeuroQueer to be Out There. (Sorry, hehe, pun.)  Turns out two of my favorite people, Nick Walker and Michael Scott Monje, Jr. had also been thinking about this word, and when we were talking about it in our magic electronic clubhouse, Melanie Yergeau (quickly becoming another fave person, but I've known her less long!) came up with this very interesting, related link using the term Neurologically Queer.  [UPDATE: Melanie is one of the greatest people ever in the world, bar none. I have gotten to know her very well, and I will be glad of this forever.]  I suspect all of us will have different meanings for the term, which, when you see what my meaning will turn out to mean, is perfectly perfect, according to what I mean.  And I look forward to seeing what everyone means!

So here is what I mean, and to tell you about it, I will tell you stories about the historical times in which I have lived, and what happened in them, through the life of myself, because this is what makes me think the ways I do, and then you will know and see what parts of it resonate for you or do not.

First of all, for me, Queer means reclamation from either side.

For me, there is such a thing as either side pressing in, two very different groups of people trying to get in on the act of telling me who and what I am allowed to be.  I don't like it in any direction.  I will start with the history of a very, very recent time, and why it reminded me of the time I found out I was gay, and then tell you about that long ago time, and then tell you about the times in the middle and also more immediately yesterdayish regarding disability status intersectionality of my own that make my wish to approach my neurology become what I mean by Queer, because don't push me, either side (some of this will be in Part 2). I reclaim from the obvious oppressors and also I do not like to be oppressively told to be oppressive and not-me by the other oppressed. It is not logical and I will explain. And nobody will agree with me and it will be like before.  Whee!

Recently.  The Word 'Queer' Is Attacked In A Meeting.

I went to this meeting within a conference even moreso because of the word "Queer" and the ideas it brought for me. You'll see next section below. There were many people in a circle so giant it had to become oval. The conversation became derailed because someone wanted the group to change its name to something without the Queer in it, and said they felt excluded, and I fell for this, because you know, see below, Queers are nothing if not working their asses off to be inclusive and socially just and all the good things, and putting themselves on the line for it all. Energetically. I fell for it hard because I did not know the history of the particular group doing this particular dance of this one person saying queer is exclusive, but I am not the only one who fell for that: none of the other queers, including those who had redone this script for four years running, could bring themselves to really tell this person how to be or not to be their personal self.  Queers are not like that. This is one reason why I am proud to be one.

[Update: I have since listened in depth to the person who was upset about the exclusivity of the word 'queer' and it turns out that some younger ones nowadays were indeed being heinously cliquish while saying they were performing "queer." Then I recently met a "queer theorist" at a conference (I think around my age) who attempted (and was sadly successful) to bully some disabled people into feeling "shame" because her theory told her we "should" be "past" the pride we needed to develop to survive, even though she clearly had no call to do this, being non-disabled herself. So the language has marched on, and I get the nuance more now, but I don't want to be revisionist so I will leave the written record of thought-over-time.]

Which Brought Me Back To The Past, Probably Before The Person Was Born (which is not meant as an ageist dig but as an indicator of the length of things that I can still sort of understand despite being time agnostic). [So, update: History is important, and I am talking about history as it formed my thought, even as I acknowledge the new pain which has emerged in the present time.]

When I found out I was gay in the eighties, I met some lesbians, who notified me that I was wrong all wrong because I dressed too much like a boy which was indicative of the fact that I must be deliberately emulating the dominant paradigm. Also, the girl I liked could pass for straight and worse yet was (gasp) bisexual so, you know, that's really really really bad.

Then, having slept that off,  I saw the headline of the paper the next morning in which the Pope at the time had gone out of his way to speak out against homosexuality. I was Catholic. It was a hard week. I was in a bit of a meltdown, to say the least.

In reality, I dressed as I dressed before I found out I liked anyone in that way. I was selving. I will write more about selving (cf Gerard Manley Hopkins) in another article because I think it is one of the most important concepts around. These people who barely knew me were telling me how I was allowed to not be like myself in their community and in the outside community I was also not allowed to be like myself. It was hard.

Fortunately I met gay men. A fabulous (oppositeland) quote I heard around this time from someone who objected to the fact that I did not have a problem with men went just like this: "You don't know anything about men. You hang out with them."  I rest my case on that right there.

People were dying of AIDS then, as they are now, but it was new to us, and there were things more important to think about than whether All The People In The World wanted to judge what I was wearing (for allegedly opposite reasons). I met the Queers and the Act Up people and found fellowship with people who didn't give a shit about telling me who I was or was not allowed to date, based on what they were wearing, because what? And these queers are actually the only ones then who would ever have dreamed of accepting bisexuals, such as my girlfriends at the time, because they were thinking of important things, like social justice, like keeping people alive, like life, and art, and being real. 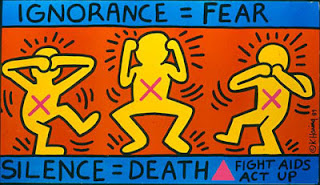 [Speaking of art and being real, here is Keith Haring's iconic 1989 poster that says on it: Ignorance=Fear/Silence=Death Pink Triangle Fight AIDS ACT UP. It has his signature fleshed-out stick-figure people representing see-no-evil, hear-no-evil, speak-no-evil, crossed out with red X's on their torsos.]

We all marched together and we said We're Queer, We're Here, Get Used To It.  That was desperately shocking, back then.  The others told us to stop, really stop, you're making us all look bad, you know, you're making us all look like freaks, nobody will ever accept us when you act like that. Nobody will ever be comfortable with us, they'll never imagine that we are just like them...

Something Else I Have To Say About This Time In History

In Oregon, they kept trying to raise up political measures so they could vote to make all the "homosexual" people illegal. That's what they called it then, the bigots, not the more inclusive alphabet soup we have today, so I'll leave it there. They wanted to be allowed to deny us housing and work and even treatment in hospitals. We weren't worried about marriage then, we were worried about not dying, and being allowed to make a living and a place to live.

The places where churches and political allies of all stripes came out in favor of us and supported us were in the metropolitan areas where we were visible, not in the rural areas where we were afraid to be visible (for legitimate reasons).  Correlation does not equal causation but I want everyone to think about that for a minute, because I have thought about it a lot.  I know what it is like to be afraid to be visible because of some terrible advice I got regarding my disability at times in life and I know what happened there.  It has not been pretty, and it did not culminate in my protection, let me just tell you that.

I am Queer because I will not be silent about the fact that I am anything. Anything. And I will keep it up. And I will not fail to use any privileges I may be fortunate enough to have or gain to open the gates wider for posterity, and for anyone else who needs this to happen. Because what is privilege for? If you know you have it, it is instrumental, that is what. It can be used to redress wrongs.

What About Now, Why This?

In life I have gained some privilege and have finally gotten over time some assimilation ability because take for example the marriage thing. It is important to me to be married because what I mean by marriage is what it deeply means to the two of us in a personal spiritual sense. More than a lot of people's actions seem to show it means to them, who never fought for it, I'll just say.  And I will not be told by the right wing fringe or the left wing fringe that it is not OK for us to be married, even if it is for entirely different reasons they may be moved to say this, see above.  Kiss my sweet patootie, all y'all. It is my life.  My being married does not do anything to anyone. It does not ruin any man-woman marriages, and it does not randomly cause a bunch more poverty and injustice and so forth to happen in the world. That's hyperbolic nonsense either way.

NOTHING ABOUT US WITHOUT US

NOTHING ABOUT ANY PEOPLE WITHOUT THE PEOPLE IN QUESTION

Part 2: I will flesh that out for you more, from the Neuro side, now that you have met my basic self of Queer.