It is our honor to repost the following statement with permission. In solidarity:
SINS INVALID STATEMENT ON POLICE VIOLENCE
Originally posted on September 4th, 2014
Sins Invalid is a disability justice-based performance project centering disabled artists of color and queer / gender non-conforming disabled artists. Our work celebrates the embodied humanity of disabled people, and we understand all bodies live in a multitude of very real social, political, economic and cultural contexts.
As an organization led by disabled people of color and queer / gender non-conforming people with disabilities, we live with high rates of state violence, from forced institutionalization, to ongoing police brutality and the murder of Black and brown disabled people.
We witness the horror of a deadly chokehold placed on Eric Garner, a Black man with multiple disabilities, by the NYPD.  We hear the cries of Ezell Ford’s mother when she realized that her son with mental health disability was shot by LAPD while walking home.  We stand with Lashonn White, a Deaf queer Black woman who was running toward police for safety, and instead tased by police and jailed for three days without access to an interpreter.  We feel rage with the family of Kajieme Powell, a Black man with a mental health impairment, who was shot by St. Louis police within seconds of their arrival, for stealing two sodas and a package of pastries.
We know that modern day police forces are direct descendants of the “slave patrols” employed to police and control the bodies and labor of enslaved African people and violently repress their resistance to slavery. We recognize that Black and brown people with disabilities are pipelined from “special education” to incarceration of one form or another.
We acknowledge that disabled people who are Autistic, who are Deaf, who live with mental health impairments, or cognitive impairments, epilepsy or movement disorders, are at highest risk of being assaulted by police, and that this is deeply compounded when we are further marginalized by homelessness, transphobia, and white supremacy.
We do not see training as a viable solution, since it leaves intact the fundamental belief of the police that their purpose is to “control the situation.”  As people with disabilities, our bodies and minds are not controllable and cannot always comply — this must be understood.  Our bodies and minds are not criminal.  We are unique and we celebrate our complexities.
We strongly oppose Urban Shield and all programs that seek to militarize police departments through paramilitary training and military equipment, as they serve to further dehumanize communities of color and poor and working class communities as “domestic enemies.”  Increased militarization of the police leads directly to increased police violence, particularly against disabled people of color.
We grieve that people with disabilities have largely been ignored and dismissed as key leaders in resistance to state violence by the US Left, perpetuating the silencing of our stories and maintaining barriers to a united front.
It is within the context of disability justice that WE SUPPORT JUSTICE FOR MICHAEL BROWN of Ferguson, Missouri.  It is within the context of disability justice that WE OPPOSE URBAN SHIELD.  It is within the context of disability justice that we hold true that ALL COMMUNITIES ARE VALUABLE. 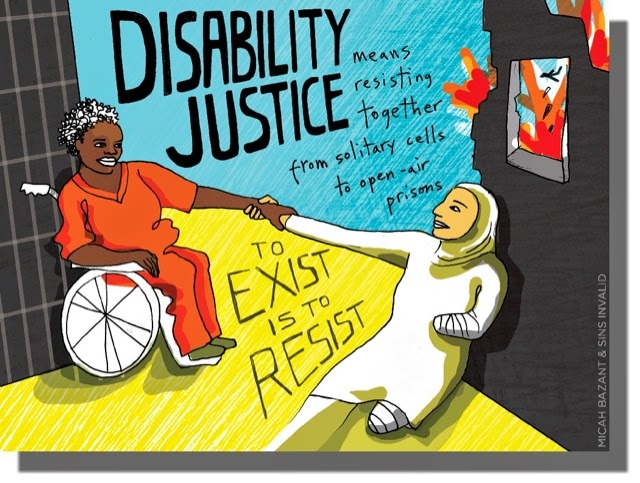 [Image description: In the drawing, the foreground image is of two women in different environments. The woman in the left of the drawing appears to be African-American. She is wearing an orange prison uniform and she sits in a manual wheelchair. The background behind her is prison bars. The woman on the right of the drawing appears to be Arab. She wears a white pants, a long sleeve white tunic that includes a head covering. Her left arm is amputated below the elbow. The women reach out their hand to each other and clasp them at the wrists. The background behind her is a thick wall with a window showing a tree through it. The text reads: DISABILITY JUSTICE means resisting together from solitary cells to open-air prisons. To Exist is To Resist. The drawing was made by Micah Bazant and Sins Invalid.]
Original location: http://sinsinvalid.org/blog/sins-invalid-statement-on-police-violence. Thanks to Corbett OToole for image description and Lateef McLeod for idea.
Posted by Elizabeth J. (Ibby) Grace at 5:12 AM